This article is for all the women out there who ever wished men had periods. Well, here’s one male species that kind of has it: elephants when they are in musth!

This world has become a little fairer, hasn’t it?

Bulls (male elephants) get this periodic condition called musth. In this phase their testosterone level can reach up to 6 times the normal level. For men (as in humans) that would mean a sharp edged jaw that could be used to, I don’t know, slice bread, extreme body hair, fat beard and for some reason no hair on their head. Yup, that’s what an increased level of testosterone does: loads of hair except where they should be. But for male elephants it’s a whole different story. One thing stays the same tho, that level of testosterone messes up with their brains BIG time!

In this period elephants are extremely uncomfortable and as a result of that they get very aggressive towards other elephants. But also people and even their caretaker, despite the fact that they’ve worked together for years. In the wild this condition lasts from a few weeks up to a month. Elephants grind kilometers on top of kilometers to be able to get rid of the excess energy. It’s not yet clear what’s the reason behind this condition. It’s not only for reproductive reasons, since it happens also outside reproduction season. Some say it’s a mechanism “designed” by nature to rearrange the leadership inside an elephant herd. Nobody knows for sure tho.

In captivity, it’s a whole different story and dealing with elephants in musth is a REAL challenge for organizations.

Part of our job as volunteers was to make sure elephants had enough food for the night. We fed them coconut leaves, kithul logs (sweet log similar to maple) and jackfruit leaves. The leaves were delivered every day fresh from the jungle and we would move a few of them around and save them as “snacks” for the day after.

One day I was moving a couple of coconut leaves to a pile we had close to one of the elephant beds. And trust me, those leaves are massive! So I was balancing them on one of my shoulders with the leaves hanging behind my back like a construction worker would carry a bag of concrete 😀

“In captivity, it’s a whole different story and dealing with elephants in musth is a REAL challenge for organizations.”

Well, since I was very focused on balancing the whole thing and try not to step on a weird spot on the path, I wasn’t paying much attention to the surroundings. All of a sudden, I see a slice of kithul log literally flying about half a meter before my eyes. If that had landed on my head, I’m not sure if I would’ve been able to type this right now, haha. 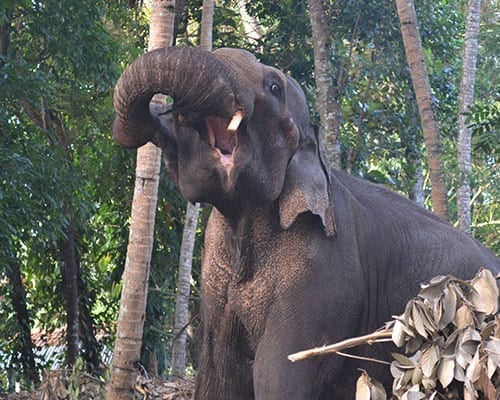 Anyways, I drop the leaves, look left and realize I was just walking by one of the elephants in musth, who was looking at me like this (picture 1).

This photo is probably what describes the feeling behind musth the best. That feeling of restlessness that makes you kick a night or get into weird stuff like roaring therapy. The same restless feeling that makes this particular elephant (named Saliya) do crazy faces, put his trunk in front of his eyes when he wanted to hide or throw stuff.

The aggressiveness is just a result of not being comfortable and feeling restless day in day out for several months!

“Because here’s the problem in captivity. The musth can last up to several months!”

Because here’s the problem in captivity. The musth can last up to several months!

Since the premises are not endless, like a wild natural reserve, an elephant in musth doesn’t have nearly enough space to unwind on a regular basis. Plus, the caretaker can’t take him for a walk in the jungle because he cannot even get close to the elephant in the first place.

The locals, caretakers especially, are generally scared of elephants. Even more so during the musth period. The stories of people and caretakers being attacked by their own elephants are a big part of their local culture. You can see such scenes in movies, kid stories, cartoons etc.

Standard practice to handle musth is to leave the elephant in an enclosed space, cleaning it and feeding it from distance, and reducing the food portions to lower his overall energy level (not having any other sustainable way to act on its energy levels). But it’s not yet enough.

Luckily the organization is now working closely with specialized vets to solve this problem and create the infrastructure (in-house) to handle elephants in musth. And this is a HUGE initiative, one of the first in Sri Lanka that could change the standards for these elephants nation-wide.

The vet are recommending larger and controlled enclosed areas where the elephant can roam free and with enough safe access points for the caretaker to perform his daily cleaning routine and feed the elephant. With their help, and regular medical analyses, this condition can be anticipated quicker so that the elephant can be safely moved to the dedicated area for his musth treatment.

Help us help them, shop our products and 10% of our profits will go to elephants like Saliya!

Mario has been involved in Pretty ECO from when it was just a concept! He has also worked as a volunteer at the elephant sanctuary in Sri Lanka and feels like he has a lot to share about the culture and those lovely giants!